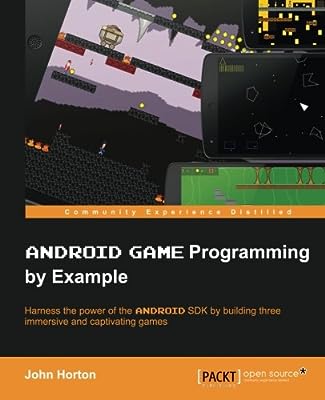 Price: $44.99
Buy Now from Amazon
Product Information (more info)
0 0
CERTAIN CONTENT THAT APPEARS ON THIS SITE COMES FROM AMAZON SERVICES LLC. THIS CONTENT IS PROVIDED 'AS IS' AND IS SUBJECT TO CHANGE OR REMOVAL AT ANY TIME.

You might be toying with the idea of learning to make games with the Android API. Game Code School are proud to show you Android Game Programming by Example.

Using the Java programming language you will develop your skills starting from intermediate level in order to build games for Android tablets & smartphones.

In this book you get to build:

If you area reader who dreams about making games using the Android API, consider trying this text.

Android Game Programming by Example was authored by John Horton and published by Packt Publishing. John is also responsible for many of the tutorials on this Web site so check out his writing to see if you like it.

This is the paperback version. You can get the Kindle edition available by purchasing directly on Amazon here:

More information about this book

In this book you get to make three games and implement all of the following features, and more! Here are a few screen shots of some of the games.

Tappy Defender is the first game and is really simple to implement as long as you have basic-level Java skills.

The biggest project in the book is aretro 2d platformer with scripted enemies, scrolling parallax backgrounds and four unique environments. Learn to create a game where the player can collect coins, extra lives and weapon upgrades. Travel from the depths of a spooky cave to the snowy mountains. Tough pixel-perfect jumps required. Casual gamers look elsewhere!

The third and final game dips in to the workings of OpenGL ES for Android. While building a cool variation ( but still retro) Asteroids game. Player's will fight wave upon wave of increasing numbers of Asteroids while you learn to rotate 2d polygons, detect collisions using the crossing number algorithm and learn the basics of OpenGL ES, the OpenGL version for mobile.